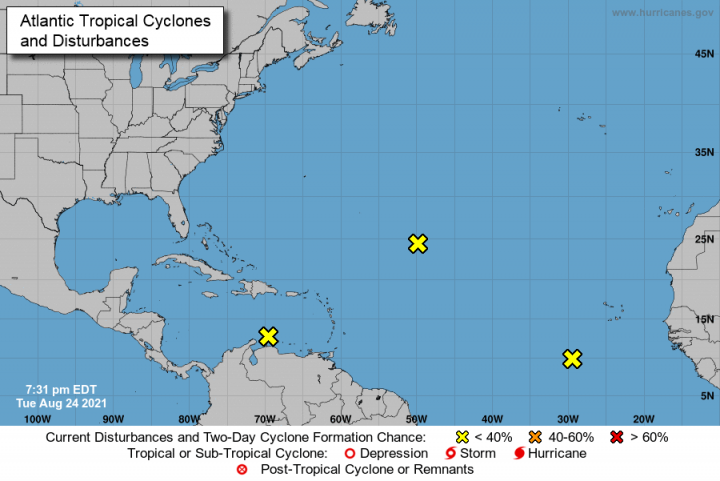 By Rubén Morales Iglesias: The United States National Hurricane Center (NHC) said it is now monitoring three tropical systems; one in the Caribbean Sea and two in the Atlantic Ocean. All have the potential of developing.

The system within the central Caribbean is a tropical wave that is located over the southwestern Caribbean Sea and later this week it is expected to form a broad area of low pressure.

The NHC said that if it remains over water it could develop into a tropical depression late this week or this weekend as it “moves northwestward over the northwestern Caribbean Sea, across the Yucatan Peninsula of Mexico, and into the southwestern Gulf of Mexico by Sunday”.

The NHC said a second “broad trough of low pressure is producing disorganized showers and thunderstorms over the central tropical Atlantic about 1000 miles east-northeast of the northern Leeward Islands”.

Not much development is expected over the next couple of days because the conditions are not favourable, but it is expected that the environmental conditions will become more favourable for the formation of a tropical depression by the weekend.

A third system, a tropical wave, is located over the far eastern tropical Atlantic several hundred miles southwest of the Cabo Verde Islands. That system, said the NHC, is causing a concentrated area of showers and thunderstorms which can develop over the next several days as it moves west-northwestward at 10 to 15 mph over the eastern tropical Atlantic. However, the NHC expects the conditions to become less conducive to develop by the weekend.