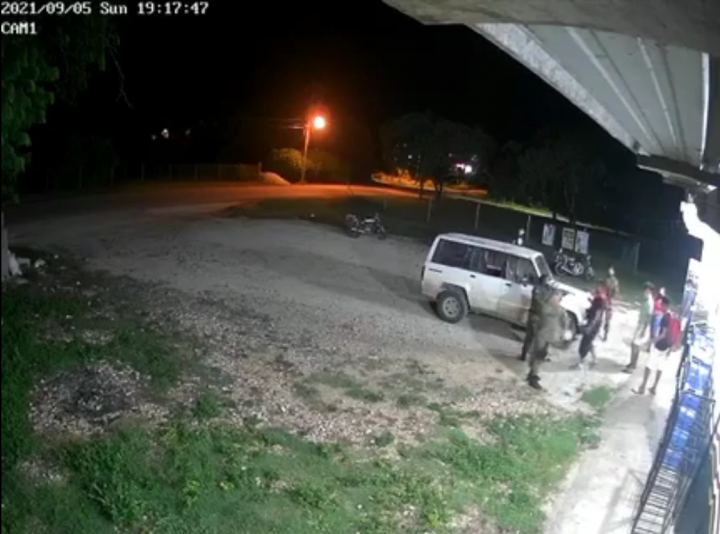 By BBN Staff: Breaking Belize News has obtained the official statement on the Jesse Escobar shooting made by the officer on the scene, which contains events that clearly did not happen when weighed against surveillance footage of the tragic and obviously brutal event.

The statement, given by Police Constable #1189 Juan Carlos Morales, says that whilst on a joint patrol with BDF soldiers, PC Morales attempted to detain some men at Branch Mouth Stop and Shop for not wearing their masks properly and for public drinking. Morales then said that an altercation ensued and one of the men attempted to throw a pint bottle at him, prompting him to fire a warning shot from his service weapon.

He goes on to say in his statement that Escobar then advances toward BDF soldier R. Valencia, (full name notably not disclosed) and threatened to take his gun.

“Jesse then reached out and grabbed the M4 Carbine that was in was in Pte. Valencia’s possession and upon doing so Pte. R. Valencia fired a single shot at Jesse,” Morales said.

Notably, the surveillance footage that was released this morning showed Escobar approaching Pte. Valencia with a cup in his right hand and his left arm extended sideways. After Escobar made a singular step towards him and seemingly in an unthreatening manner, Valencia fired the shot which killed him on the spot in front of his wife and baby daughter. At no time in the footage did Escobar make contact with or reach for the M4 Carbine nor was there any visible struggle as reported by the patrol team.

Morales also noted in his statement that after the shot was fired, those at the shop began throwing pint bottles at the joint patrol team and attacking them; however, the footage clearly shows those at the shop grieving for Escobar, while the members of the patrol team spread out, one of them keeping his weapon drawn. After the shooting, one officer yelled “Next boxer” audibly in the surveillance camera which many on social media are highlighting as a clear threat to others on the scene. Notably, Commissioner of Police Chester Williams made a statement on the incident this morning but stopped short of disclosing whether or not the officer who wrote the report would be investigated for falsifying a report. We also note that recently, penalties were increased for media houses that are deemed to report false news.

BBN notes that there is a section of the statement from where the person giving the statement agrees to be held liable for prosecution if any of the information given is knowingly false or is not believed to be true. We at BBN would like to note that “what is good for the goose is good for the gander” and laws are meant to be upheld across the board.