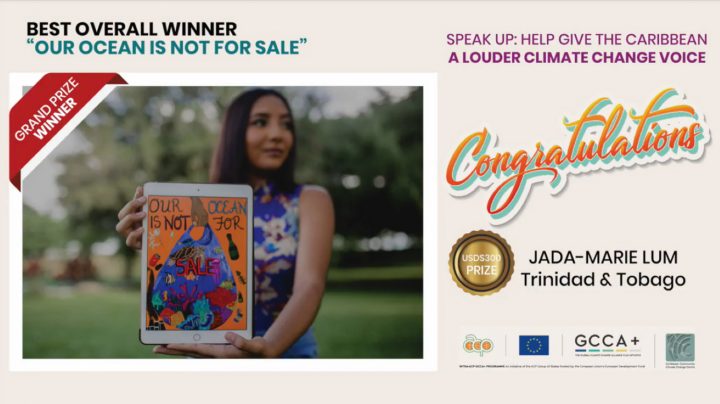 Lum won the “Speak Up – Help Give the Caribbean a Louder Climate Change Voice Art Competition” with a painting entitled “Our ocean is not for sale.”

The submissions were judged based on impact of statement and visual appeal, creative use of material/art medium, originality and clarity of message, and relevance to the Caribbean.

The organizers asked the participants to express how climate change had affected them and what’s their message to the world on Caribbean climate change.

Climate change is affecting the entire world, but the Caribbean is in a geographical position which leaves it more exposed to the ravages of this ever-present threat.

“As a combination of island states and coastal territories, the Caribbean is a region most vulnerable to climate change — especially with our collective reliance on tourism and/or nature-based economies,” said the message to the participants when they were being encouraged to engage in the competition.

“Extreme weather events like hurricanes, droughts, and flash floods are more destructive; livelihoods, including those in fisheries and agriculture, are threatened by unpredictable weather patterns; fragile ecosystems like coral reefs struggle to survive continuous coral bleaching events and disease outbreaks; while shoreline communities are forced out of their homes and ways of life due to sea-level rise.”

Other award winners are:

“Hold on to life before it withers before our eyes.”

“Let us as a Caribbean: rethink, regroup, replant, rebuild, and reuse.”