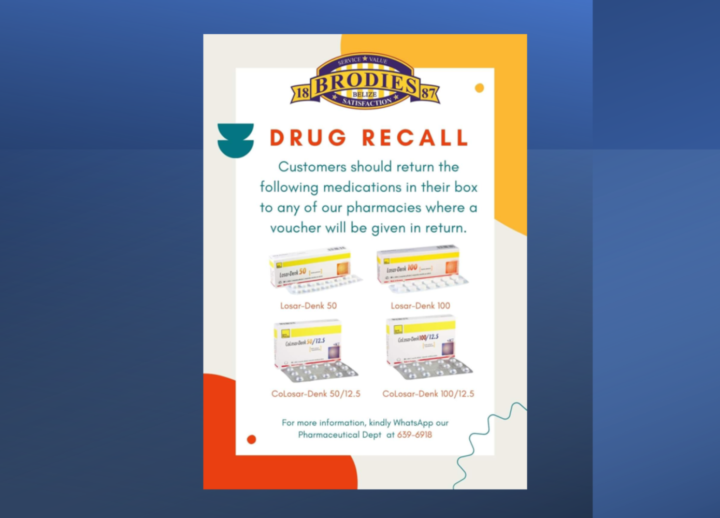 By BBN Staff: Following Tuesday’s announcement by Brodies asking its customers to return high blood pressure medications from Denk Pharma made in Germany, the Ministry of Health & Wellness (MOHW) on Wednesday put out a public advisory of a “voluntary recall of Losar-Denk (Losartan) and CoLosar-Denk (Losartan/Hydrochlorothiazide) from the Belize market”.

Losartan is an angiotensin II receptor antagonist and hydrochlorothiazide is a diuretic. The medications are used to treat high blood pressure and heart failure.

Brodies did not say why they are recalling the medications but indicated that “customers should return the following medications in their box to any of our pharmacies where a voucher will be given in return.”

Denk Pharma GMBH & Co. KG informed the Ministry of Health & Wellness on October 4 of an update to perform a voluntary recall of Losar-Denk and CoLosar-Denk from the German market.

“The recall comes after the European health authorities announced the detection of an impurity called “4-Chlor-Azidomethyltetrazole” in the active Losartan potassium,” said the MOHW.

“The presence of the impurity is also above the Threshold of Toxicological Concern (TTC) limit according to the guidelines used to identify potential genotoxic impurities to limit potential carcinogenic risk.”

The MOHW said it “strongly encourages the public to immediately discontinue the use of this medication, discard any unused medication or return it to their nearest pharmacy”.

The MOHW said, “Denk Pharma GMBH & Co. KG has stated that there is no clinical data available on the impact this impurity can have on humans.”

This is not the first recall of Losartan. In 2018, the United States Food and Drug Administration announced a voluntary recall of blood pressure medication losartan potassium hydrochlorothiazide because it contains trace amounts of n-Nitrosodiethylamine (NDEA), a potentially cancer-causing chemical.

Brodies said that for more information, customers should WhatsApp their Pharmaceutical Department at 639-6918.

The MOHW said their Pharmacy Unit in Belmopan may be reached at 828-4464.