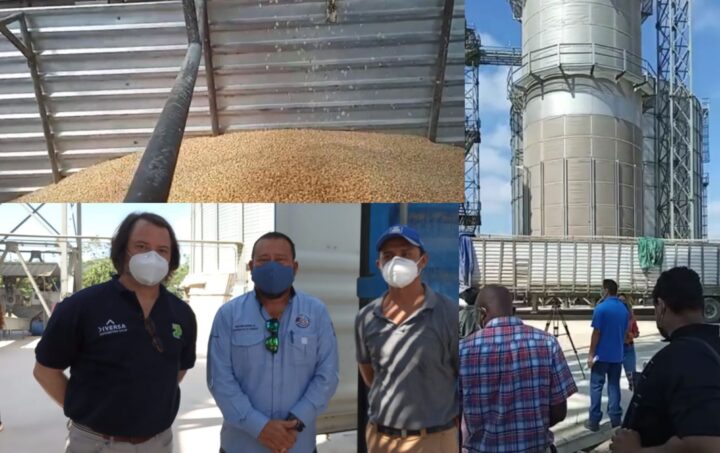 “Today we invited the Minister (Jose Abelardo Mai) and the press to witness the very first truckload of corn that we’re sending out to Maseca under a contract that we recently signed with them for about 500 metric tons of corn,” said Gilbert Canton, general manager for Cayo Grain and Agro Supply and Valley of Peace Farms Limited.

“Our corn ranks as Grade One using USDA grading standards and it has high protein content and is definitely well accepted by the Maseca company. This is one of the first shipments. There’s a larger shipment going out in the next coming days,” said Minister Mai at the Cayo Grain’s and Agro Supply Limited facility in Ontario.

Canton said that after a call, about three weeks to a month ago, from Maseca saying they needed corn at their Guatemala facility, they agreed to export to Maseca and sent corn samples to make sure their corn qualified.

“Lab results were great. So, then they said, “OK well, we’d like to purchase some corn.” We went through contract negotiations and we’re able to come up with 500 metric-ton contract and that’s the first corn that’s going out.” Canton said.

“It’s a new venture for us, we were able to start with the exportation of corn for the corn meal of Maseca in Guatemala,” said Alvaro Rodríguez of Diversa, the Guatemalan company that represents Mexican corn company Maseca.

“For this first run we’re going to export eight containers total, five of them are yellow corn and three of them are white corn.

“This is a first test run,” Diversa’s Carlos Rodriguez. “The idea for the future is to expand into the large quantities of tons per year with a contract in the long term.”

But while it might be a first export under Diversa to Maseca, Minister Mai said that Belize previously did business with Maseca.

Canton said that the fact that Belize has a partial scope agreement with Guatemala helps to facilitate the corn exports to the neighbouring country.

“The price is good at this time. So, I think that the farmers are going to be very happy with what is happening today in the corn industry,” said Minister Mai.

Catherine Hob of the Ministry of Agriculture, Food Security, and Enterprise contributed to this article.