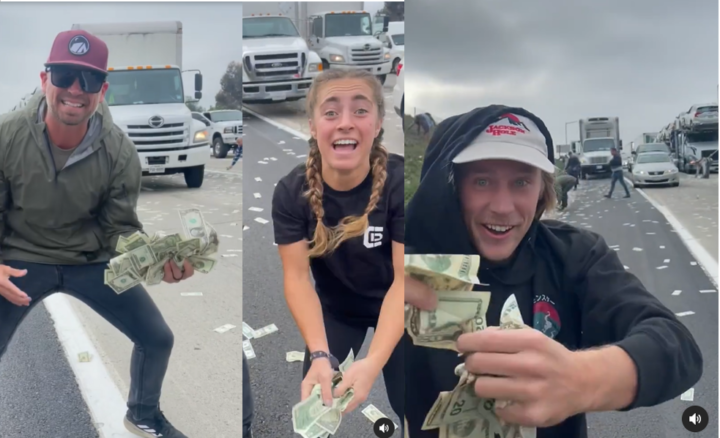 By Rubén Morales Iglesias: People stopped their cars on a San Diego freeway on Friday, November 19, and scrambled for bills of various dollar denominations that were flying like crazy after money bags fell off from an armored vehicle transporting money.

Money was free-floating and scattered on the highway when the freak occurrence happened on Interstate 5 in San Diego freeway at about 9:15 am (11:15 Belize time).

People filmed themselves and others picking up the money. Some threw it up in the air and shouted in glee, others picked up as much as they could, got in their vehicles and drove away.

“Have you ever seen this before?! What would you do?!” influencer Demi Bagby asked on Instagram where she posted a video of the money being collected by people. She herself picked up a number of bills and threw them up in the air. As she drove away she noted that ahead of the area where the money was spread all over the motorway, there were no cars.

Now people might get all crazy like they did on Friday in San Diego. This is a rare occasion (it’s happened before) and some just cannot resist the temptation. But picking up money like that and taking it is no less stealing than if one walks into a bank and robs it.

Two persons who were unlucky to have locked their cars with keys inside and were blocking the highway ended up being arrested on the spot.

Police officers helped to collect the cash in carrier bags at the scene. Most were $1.00 and $20 bills.

Local police and the FBI asked people who took money to return it. One officer said on camera that they had enough video evidence to locate those who had taken money.

Reports said later that people had been returning the money.