Complainant asks for apology from robber/shooter

Tropical Depression 9 approaches from the west 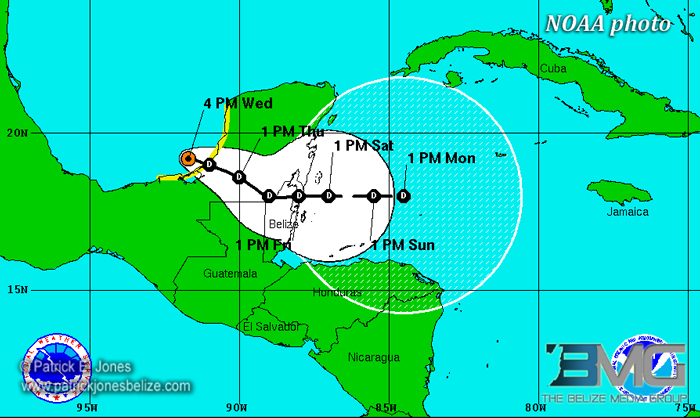 Wednesday, October 22, 2014. PATRICK E. JONES Reporting: Proving the unpredictability of tropical cyclones, Tropical Depression 9 has failed to develop into a named storm as forecasters expected as it continues to move slowly towards the Mexican state of Campeche.

What’s certain however, is that whether or not the system develops into a named storm, Belize will impacted by a lot of rain as TD-9, or what becomes of it, is expected to pass right through northern Belize emerging out in to the Caribbean Sea in front of Belize later this week.

Forecasters still expect the system to develop into Tropical Storm Hanna; but as of 6 o’clock this evening it remains a Tropical Depression carrying maximum sustained winds of 35 miles per hour.

Its easterly motion has shifted to an east-southeast forward motion at a slow 5 miles per hour.

While forecasters say that TD-9 could fizzle as it makes landfall tonight an moves further inland over the Yucatan Peninsula and Belize, it remains, as of now, a rainmaker with between 5 and 10 inches of rain expected as the Depression progresses.