Venezuelan ambassador says they will not “supervise” Petrocaribe; program will keep going 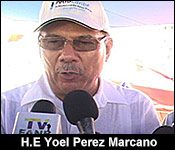 Friday, June 12th, 2015. BMG: The Government of the Bolivarian Republic of Venezuela is marking ten years of Petrocaribe partnership with Belize. During the ceremonies marking the arrival of the Venezuelan navy vessel ‘Simon Bolivar’, Ambassador of Venezuela to Belize H.E. Yoel Perez Marcano was asked for his views on the spending habits of the current administration with regard to the program, particularly reports of the Minister of Education sponsoring a constituency trip to Corozal for a beach-side party. According to Ambassador Marcano, “Rules for the PetroCaribe agreement are very much different from those of the IMF and the World Bank. We don’t supervise.

We don’t control. We don’t decide for a sovereign country. We issue our opinions. We put forward recommendations. We proposed initiatives, but always in the framework of respect for the sovereignty and of the dignity of our sister countries which are part of PetroCaribe.”

Concerning the long-range status of the program, which has come under attack from opponents of the Nicolas Maduro administration, the Ambassador reported, “The PetroCaribe impact is for the long haul, because the people of Venezuela will keep a government that plays an important role and wants to promote solidarity and cooperation among our countries. We have already shown that during the crisis of the oil prices during this year.

We showed that already in the crisis of 2007-2008. We have shown that through difficult years during the 15 years and even the manifestations against the government of Venezuela, we have shown that resolute.”