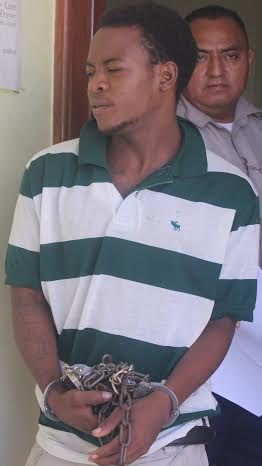 Monday, November 2, 2015.  Aaron Humes  Reporting: 22 year old Jerome Locke continues to fight for his life after being stabbed in the chest last week, but police say they have caught the man alleged to have done it. 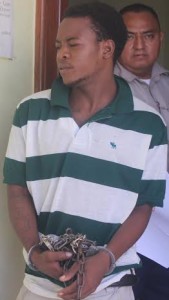 No plea was taken from Williams and due to the nature of the offenses, Williams was denied bail and remanded to the Belize Central Prison until December 16, 2015.

Locke’s mother, Melita Flores, told us that when her son was stabbed on October 23, he collapsed twice while being rushed to the hospital with an object lodged in his chest. Doctors told her that his being alive is a miracle as the stab was over his heart.

He was on a machine to help him breathe but is now breathing on his own.

According to Flores, her son and the accused Ignatius Williams had a previous incident 7 months ago prior to him being stabbed.

Locke is alleging that seven months ago while at BTL Park Williams, who he said is a friend to some of Locke’s friends but not to Locke personally, got into a fight with him after Williams began throwing stones at a group in the area and Locke reprimanded him and told him to leave. Locke said Williams punched him first and he hit back in self-defense before police broke them up. According to Locke, he never saw or hung out with Williams again until he was stabbed last week.

Williams was out on bail for another attempted murder and abetment to murder in connection with a reported murder-for-hire plot, we are told.