Trump threatens to cut us aid in Honduras over immigrant caravan 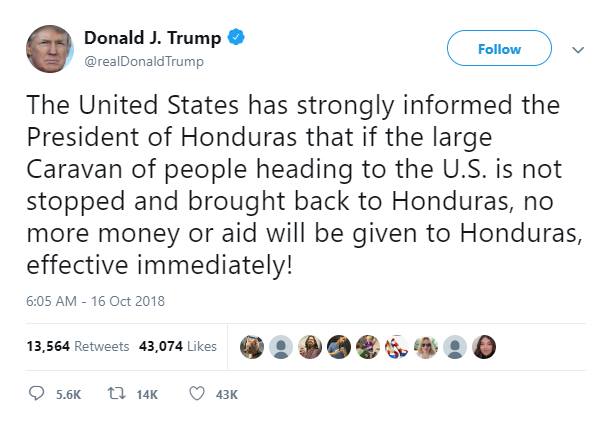 By BBN Staff: Today, United States President, Donald Trump threatened to cut US aid to Honduras if they did not cease the immigrant caravan heading to the United States.

Trump posted on his Twitter account: “The United States has strongly informed the President of Honduras that if the large Caravan of people heading to the U.S. is not stopped and brought back to Honduras, no more money or aid will be given to Honduras, effective immediately!”

Thousands of migrants crossed from Honduras into Guatemala on Monday en route to the US.

The migrant caravan crowd doubled since Saturday when it left Honduras.

The “March of the Migrant” as they are now referred plan to seek refugee status in Mexico or go to the US.

The Trump Administration has been tough on US immigration policies, and according to Reuters, ‘illegal immigration is likely to be a top issue in Nov. 6 U.S. congressional elections, when Democrats are seen as having a good chance of gaining control of the House of Representatives from Trump’s fellow Republicans.’