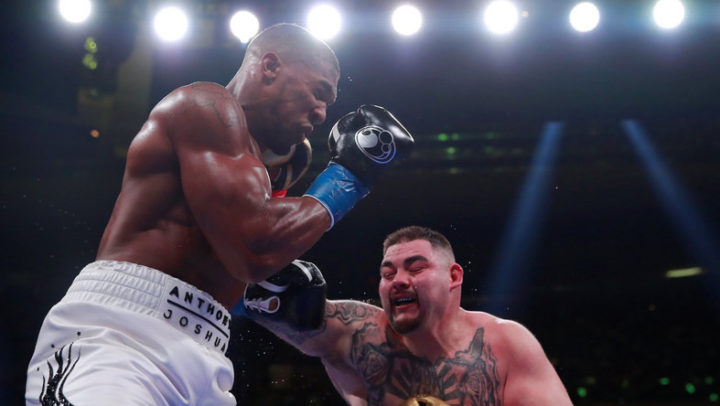 By Aaron Humes: Could Jarrell “Big Baby” Miller have done to Anthony Joshua on Saturday night what Andy Ruiz Jr. did?

A pair of adverse results in drug tests prevented that, but his replacement shattered Joshua’s aura of invincibility – and his perfect record – under the bright lights of Madison Square Garden in New York City and captured three belts.

Ruiz, unfancied despite his 33-1 record, used a speedy counterpunch style to flummox his more polished opponent, scoring two knockdowns in the third round after getting nailed by Joshua early.

Ruiz grew into the contest, forcing Joshua to take more chances, and ultimately luring him into the knockdowns in round seven that sealed the fight. The Mexican national joins the ranks of James “Buster” Douglas, Oliver McCall and Hasim Rahman as conquerors of heavyweight royalty – Mike Tyson and Lennox Lewis respectively, though both eventually regained their titles. He is the first titlist at the heavyweight level of Mexican descent despite being American born.

Joshua will seek to do the same in a potential rematch, but gone is any talk for now of unification with American Deontay Wilder or a showdown with Tyson Fury. Ruiz, who almost pulled out after being teased for his 268-pound frame, must quickly prepare for a more focused and determined opponent.

And Miller, certainly, is today wondering what might have been.