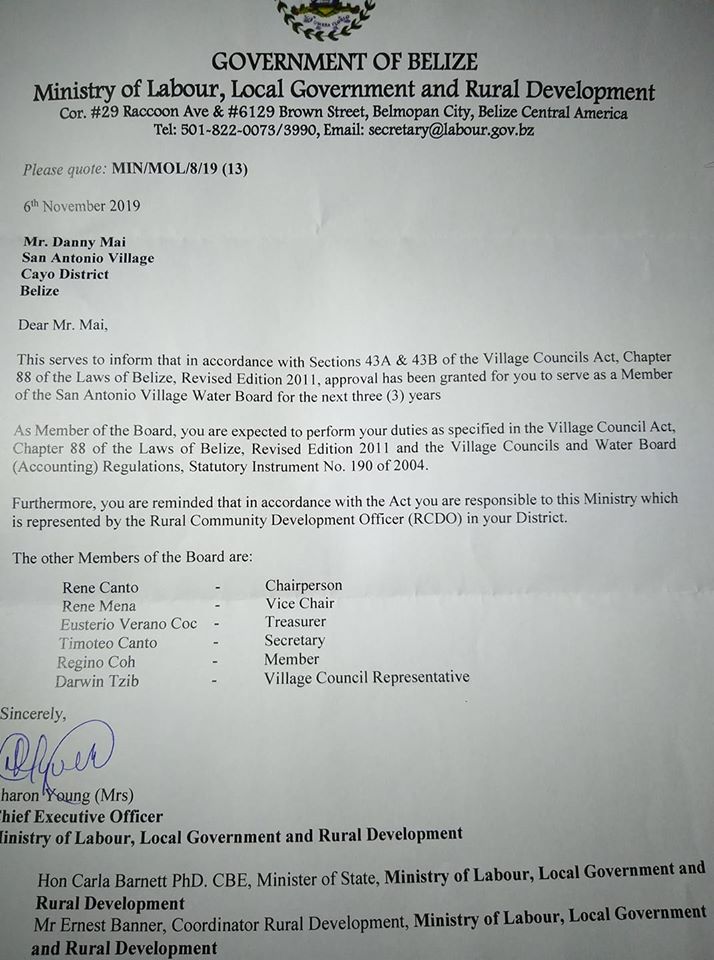 By BBN Staff: The San Antonio Village Council issued a statement yesterday calling out the area representative, Rene Montero for his ‘disregard’ for the consultation process carried out by the council.

On October 26, BBN reported of the Water Board situation in the village that was won by the PUP slate in the last village council elections.

Then on October 28, the council hosted a consultation meeting with villagers to issue an update on the appointment of members for the board since according to the council, Montero had submitted names of the remaining 5 members of his choice without consultation of the villagers or the council.

In its statement, the council claims that Montero did not contact them for any meeting and ignored invitations to attend meetings within the village.

In addition, the council claims that it delivered a letter to the office of the Minister of Rural Development in Belmopan providing evidence of the consultation but it was disregarded.

“This is abuse of power, outright and open corruption condoned by people at the very top. It’s a privilege given to them to serve, but they have abused it and have become dictators. In turn, the people who elected them have been neglected and their rights trampled. It’s frustrating to see nothing been done from the very top to stop this abuse of power,” the statement noted.

The council says that it is unfair that educated volunteers with the right qualities to move the water board forward are not being allowed due to ‘cronyism’.

The council says that it is the hope of villagers to see its water resources properly managed and not diminished with ‘corrupt politicians looking for political gain.’

It ends by calling on villagers to take a stand against the Minister’s decision to appoint water board members without consultation from villagers.