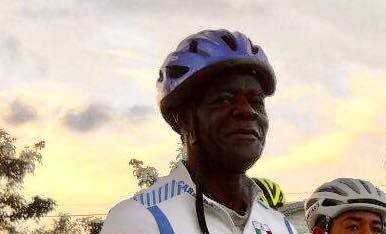 By Aaron Humes: The Cycling Federation of Belize this morning announced the passing of Glen “The Big Man” Gordon, 65, a top contender in the sport in the 1970s.

Intimates and friends of Gordon flooded the Federation’s Facebook page with their memories. According to Elston Wade, “There was a great rivalry between Glen, [Alfred] Parks, [Kenrick] Halliday, [Eugene] King and others. He was always in the top ten in the Cross Country and finished second in 1979…”

Female cyclist Hazel Morrison Spencer wrote, “He was always ready to give you tips and tricks of the road… a great cyclist, wonderful co-worker and a humble [giant]…I remember he tried to teach me how to sit behind the big trucks and [enjoy] the ride while it blocked the wind for you…until we meet again bro…”

And former cycling sponsor and occasional participant Santino Castillo, alias “The Chief,” claimed Glen was the first cyclist he ever sponsored, in 1980, the year of the “Big Crash” at the now Marion Jones Sporting Complex during the Cross Country Cycling Classic; the race was won by Alexander Vasquez over Anthony “Burger Boy” Morris, with a young Andrew Smiling in third. The photo accompanying the announcement, Castillo said, featured Gordon surrounded by his first teammates on Team Santino’s.

Gordon was a long-time employee of Belize Electricity Limited (BEL).

Cause of death was not immediately announced, nor plans for funeral services.

We extend our condolences to all who knew him; may he rest in peace.