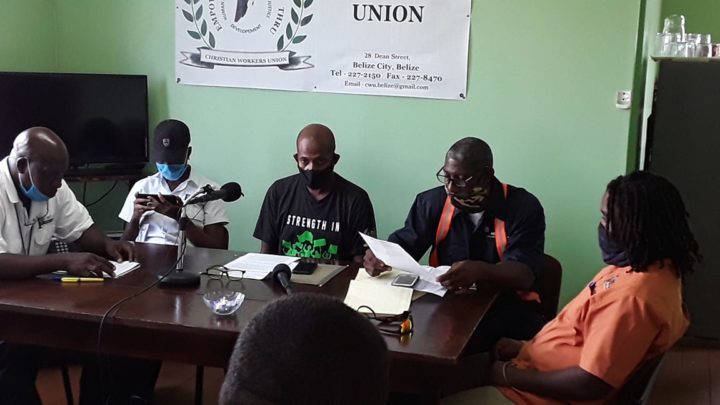 By Aaron Humes: The Christian Worker’s Union (CWU) describes as “fiction” the view of Port of Belize Limited that it has been reasonable and respectful in proposing to temporarily cut staff salaries due to COVID-19.

Neither, says the Union, has it been unfair to employer or employees, to have adopted an “illegitimate” position agreed by its members.

Amplifying a press statement at a noon press conference, President Evan Mose Hyde explained that union representatives were expected to inform members of a decision already made.

It was not true, said Hyde, that members were disenfranchised from the vote. CWU has 80 registered members at the Port of the 150 employed there (and certain management are by law and agreement not allowed to participate in the Union).

The Union cites article 25 of the standing collective bargaining agreement which states that the Port, inter alia, “shall supply to the Union all reasonable information to ensure good industrial relations.”

Hyde said the receivership has regularly refused to honor this section of the agreement because of its status, but has reduced the annual 5 percent bonus to staff to 3 percent annually.

That the Port appears to be going ahead with the salary cut starting today, underlines their arrogance and intransigence, says Hyde.

“We are not in the business of giving out pandemic passes,” said Hyde, challenging perceptions that a salary cut hurts less than laying off workers. He added that workers must ensure that this is the last possible option, and that the Port has not taken advantage of loopholes to deny expected benefits and services.