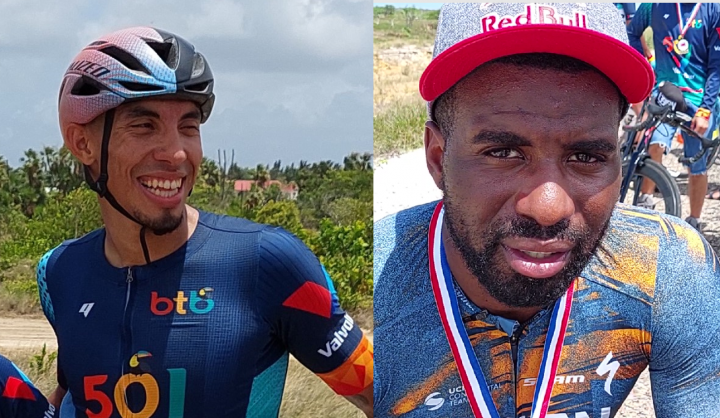 By Rubén Morales Iglesias: “I like racing against Oscar, man. Like Oscar is typically not afraid to ride and he rides forward, and I always admire that, you know what I mean,” said Justin Williams, National Road Champion, of the man who took him to the wire in the National Road Race this past Sunday.

“I admire that in a rider and all the guys that were in the breakaway rode forward. We didn’t have a lot of negative racing which is fantastic.”

“But Oscar is a very big talent in Belize and I’m hoping that I can help put him on a bigger stage and take him along with everything that we’re creating in America,” said Justin who has his own cycling team, L39ION of Los Angeles.

And it’s just fitting that he spoke like that of his rival because his win over Oscar was no walk in the park. In fact, after 87 grueling miles, Williams was exhausted and appeared pained all over while Oscar Quiroz could have gone another 50.

But, then again, Justin had more to lose if he didn’t win. So, he left it all on the road. Not to say Oscar didn’t.

But the reality is that Justin is a professional rider. Oscar is not. Justin has been riding in the US national criteriums while the great majority of Belize riders, with the exception of those going abroad, had been like dormant volcanos for more than a year not being able to race. Cycling just came back on the scene on May 1. So, they are not at their best. Oscar included.

“They ride differently than we ride in the [United] States. The tempo is a little bit higher, but here it’s more punchy. It’s really, really fast and then slow, and it is really, really fast. But it’s equally as hard. So, for not riding for very long, that final group of five guys, man, they’re still really hard.  I mean this is the hardest race I’ve done all year. So, you know, I think that says a lot,” Justin said.

In the end, the Belizean-American won by just over a bicycle length.

Oscar cried tears of frustration after the race sitting on his bike surrounded by his family and teammates, but he remained on his feet for nearly an hour until the award ceremony.

A short distance away on John Smith Road, Justin practically took off everything with his jersey down to his waistline. He appeared to be in intense body pain and needed to hole up in a car to regain his energy.

Professional against an amateur.

Experience prevailed on Sunday, even if just, just barely.

But, thinking more about it, it was the power of the mind. Williams was willing to torture his body so he would not lose.

In the end, Oscar recognized Justin and gave him his due.

They will live to meet another day, but if Oscar is to beat Justin, he must do like Justin just did.

Live through the torture.