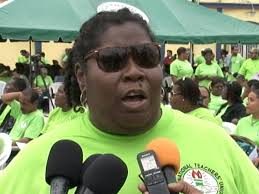 Thursday, October 1st, 2015. Aaron Humes Reporting: Students in Belize City and across the district had a half day of school today as their teachers met at the Holy Redeemer 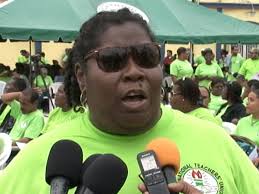 Parish Hall for the bi-annual general membership meeting of the Belize City branch of the Belize National Teachers’ Union (BNTU).

The Union’s branches have been meeting since late August and the Belize District, which is easily the largest of the ten branches, were the last to hold their meeting.

Kathleen Flowers, the incumbent president, was re-elected for another two-year term with the most recent members of the executive rejoining her, though a few changed positions.

According to Flowers the BNTU’s Council of Management will be discussing the outstanding issues brought up at the branch meetings, as well as the ongoing labour situations with sister unions although the latter did not come up during today’s meeting.

The general meetings are held every February and September, either side of the national convention during April.