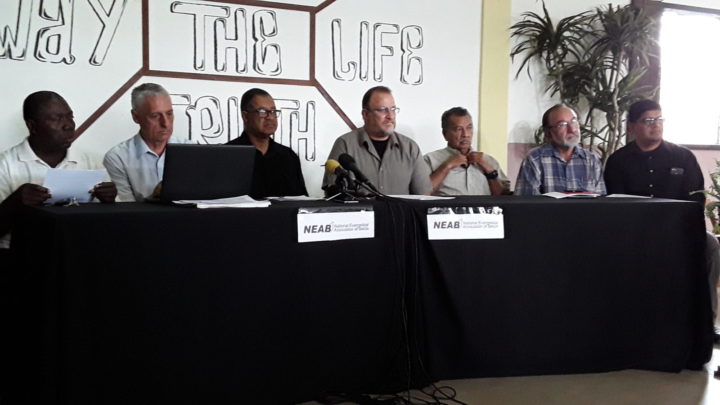 By Aaron Humes: The National Evangelical Association of Belize (NEAB) has been staunchly opposed to the August 2016 decision of Chief Justice Kenneth Benjamin which redefines Section 53 of the Criminal Code concerning sexual activity against the order of nature and the Constitution to include sexual orientation as an interpretation of sex, being one of those things it is unlawful to discriminate on.

The Government, Attorney General Michael Peyrefitte told us this afternoon, is still considering the merits of an appeal and it has 42 days’ notice to file such an appeal, therefore a decision will be made in due course. That deadline would appear to fall in early February.

The latter ruling, which was upheld by the Court of Appeal on December 30, appears to more greatly rankle the breakaway group, who say that it opens the door for these “harmful practices” to be taught in schools and to otherwise be made “natural and normal.”

NEAB President Reverend Lance Lewis asked, “…what is the definition of sexual orientation? Whose definition? Pedophilia is currently claimed as a ‘sexual orientation’ by pedophiles, so now a ‘fluid, evolving’ definition will form the basis for non-discrimination in our Constitution? We and our member churches are vehemently opposed to man’s efforts to redefine marriage and sexuality, which man did not create. God did!”

He added, “We would want to appeal to the C.C.J., but I am not sure that we as the NEAB – but we are going to get a broader group of persons and if we can go to that then we will go. But we are praying to Almighty God to step in – which he has never stepped out – to show his power in all of this. We are humans and we make our point but the government still does not hear us and the powers that be does not hear us but we know that God hears us and God will judge in the long run. The sky will fall.”

Controversially, NEAB Secretary George Ferrar claimed that the “normalization” of homosexuality will cause the curious to “try it [out] and they are going to very likely contract AIDS and be a big burden on the health system, drive up the cost of health in Belize which everybody is going to pay for.”

There was a rise in HIV infections in 2018 but the entire population suffering from HIV/AIDS is less than 5,000, and the LGBT community has been numbered at less than a tenth of that number.

NEAB has promised to rally opponents of the decision to lobby for an appeal in the first instance and to continue opposition to this practice.