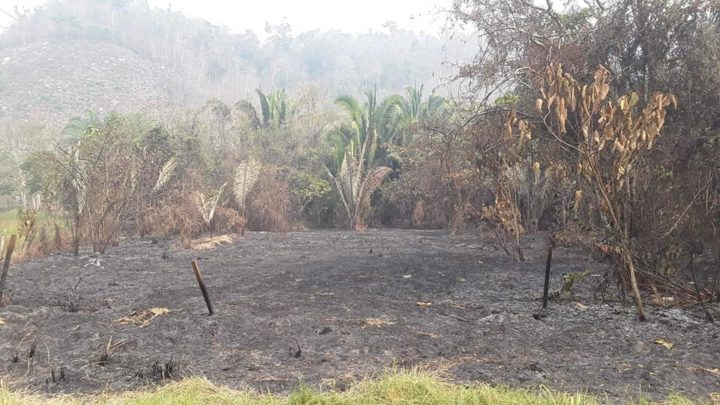 By Aaron Humes: Photojournalist and member of the board of Friends for Conservation and Development (FCD) Tony Rath has documented the unprecedented wildfire destruction of the Vaca Forest Reserve observed in a recent trip – and also caught first-hand the takedown of a Guatemalan illegally clearing land in the reserve by FCD rangers.

There appears no one immediate answer to the question that brought Rath, FCD Executive Director Rafael Manzanero and others into the forest, but many problems were identified that if not resolved could see the complete destruction of the reserve and a barrier to preserving the nearby Chiquibul forest complex removed.

Writing for Medium, Rath details that the detained Guatemalan knowingly illegally crossed the border to clear land for agricultural purposes on Belize territory. After being ambushed, he shared he has no choice but to seek a livelihood planting pumpkins on Belize’s greener pastures since all the land near their Guatemalan communities has been grabbed by wealthy and dangerous cattle barons who have – in recent years – moved their illegal enterprise into Belize.

Among the causes listed by Rath are legal and illegal land clearing (and claiming) which coupled with the Guatemalans’ illegal clearing for agricultural and pasture purposes has led to the decimation of some 1,005 acres of forest cover. The initial 52 thousand square acre reserve declared in 1991 has been reduced to below thirty thousand acres by regular dereservation of property and the building of the Mollejon and Vaca hydroelectric dams and related infrastructure including roads.

Rath writes, “There are reports of smuggling goods, human trafficking and organized crime in the region. The Police Force, Forestry Department, even the Belize Defense Force (BDF) find it safer to work with the corrupted conditions in the VFR — or ignore them — rather than enforce the laws of Belize. In less than 30 years, the VFR has morphed from a pristine wilderness to a degraded, dying landscape.”

The wildfires are thought to have originated at a cattle pasture with barbed wire fencing which displayed charred fields nearby. The usual fire breaks built to contain fires on milpa farms also apparently failed.

Rath concludes thus: “FCD is not a security organization; their purview is not protecting our national sovereignty by guarding the border and arresting illegals. They are environmental protectors, tasked with safeguarding our watersheds, our forests, our wildlife in the Chiquibul. And yet these young men risk their lives — without backup — so we have clean water, clean air and a sovereign nation with secure borders.

Many have asked before “Where is our BDF [Belize Defence Force]? Why are they not confiscating cattle, arresting illegals, keeping our borders secure? Why is this happening?” There is no doubt that if FCD stopped their patrols, stopped the interdiction and arrest of illegals, the Chiquibul — our western border — would quickly collapse, our watersheds polluted, our wildlife poached and killed, our forests cleared. The question should not be “Why is this happening?” The question should be “Why do we Belizeans continue to allow this to happen?”