Commissioner to city criminals: You have been warned 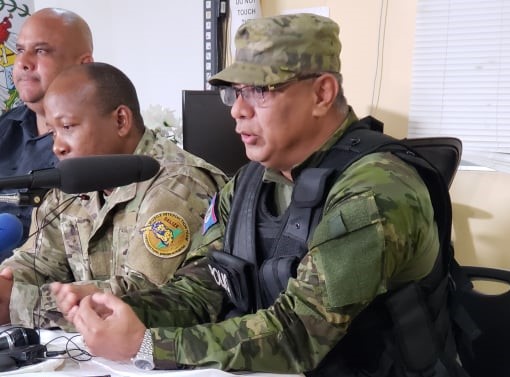 By Aaron Humes: Ten gangs are under target in Belize City, according to ACP for Operations Marco Vidal.

The State of Emergency extends for 30 days from today’s date.

Singled out were the Ghost Town Gang of Mayflower Street and the Southside Gangsters based around Caesar Ridge Road.

Some 99 persons have been detained for questioning at this time, while another three were arrested in Belmopan.

Quantities of drugs, firearms and ammunition were also seized by the combined Police and Belize Defence Force teams numbering at least 300.

Vidal warned that the long arm of the law extends beyond borders and any movement there runs afoul of Statutory Instrument 94 which is in effect.

As for any claims of damage to property and other issues, the Commissioner said those complaints are expected and should be reported to the Professional Standards Branch for investigation.

But he added that police will not wait for you to open your doors for them if, for example, someone inside may have a firearm and could start a shootout.

The response is proportionate to the level of violence they expect from the element they are dealing with.