National Hurricane Center: There are two tropical storms in the Atlantic Ocean 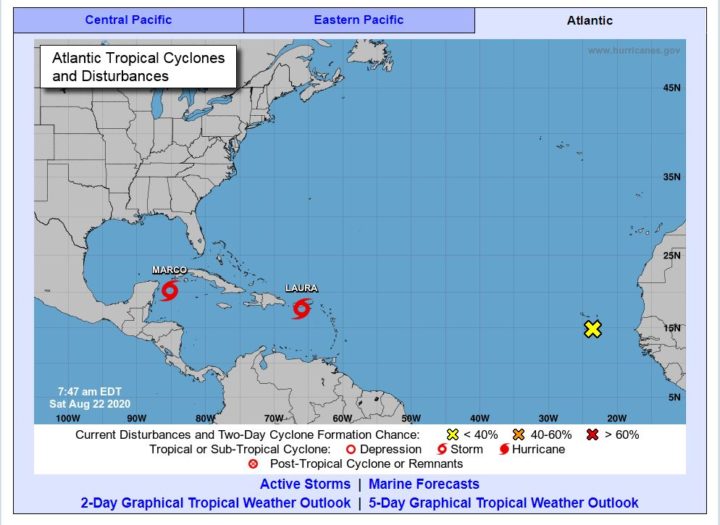 By BBN Staff: According to the National Hurricane Center (NHC), there are two tropical storms in the Atlantic Ocean.

Yesterday before 11PM, Tropical Depression 14 strengthened into Tropical Storm Marco over the northwestern Caribbean Sea and is forecasted to move near the Yucatan Peninsula today.

According to the NHC, the system is gaining strength and has maximum sustained winds of 45 miles per hour and is moving north-northwest through the Gulf of Mexico at 12 miles per hour.

Tropical Storm Laura is expected to become a Category 1 Hurricane later next week.

The Weather Channel is stating that, “Tropical Storm Laura will carve through Puerto Rico, the Virgin Islands, Hispaniola and Cuba, bringing locally flooding rain and wind, then is an increasing, but still uncertain, hurricane danger for the U.S. Gulf Coast next week anywhere from the Florida Panhandle to the Texas coast.”

Yesterday, the National Meteorological Services of Belize and the National Emergency Management Organization (NEMO) issued a statement to the Belizean public advising to stay alert and start putting a plan into action.  According to NEMO:

“If the situation changes for the worse NEMO would activate its national mechanism and declare Phase II -Red I to put in effect a provisional Tropical Storm Watch for the coast of Belize which means (1) people will need to put their family plan into action, (2) the public would be advised to shelter in place in a safe building, (3) school managements would be notified that NEMO needs to access schools as shelters, (4) a price freeze would be issued for all goods (5) public and private essential agencies and utility companies would be informed to release their employees to seek shelter for their safety, (5) road infrastructure works would have to prioritize actions that will enable mass evacuation and (6) media houses and telephone service providers would be advised to secure their communication infrastructure, including other actions.”