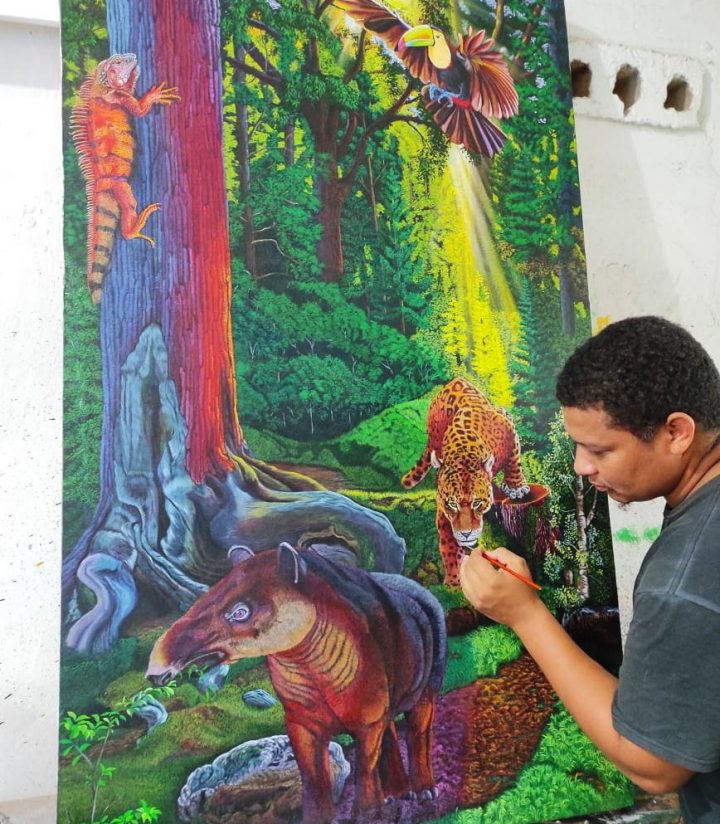 Kelvin is a Belizean painter specializing in realism while at the same time adding his own brand of expressionism.

Kelvin’s journey to becoming the artist he is now was not a linear path. Kelvin started expressing an interest in art at a young age but these interests were set aside in order to focus on academics which would then lead him to obtain a degree in math and physics in the hopes of becoming a civil or electrical engineer.

After graduating Kelvin would go on to work at a business located in Placencia Village.

While working in Placencia Village, Kelvin would walk past gift shops and other artists rekindling his interest in the arts as well as making him realize that it was possible for him to pursue art as more than a hobby.

Although he hadn’t been an active participant in the art world for years, Kelvin was determined to learn all he could by doing copious amounts of research and practicing as often as he was able.

Kelvin quickly discovered that painting employed different techniques compared to the drawing that he was used to but, despite these initial difficulties, he continued honing his skills and began painting in 2009.

Kelvin resigned from his job and began painting full-time 2 years ago in order to forge his own path and create for himself and share his work with the public. He began selling his art under the name Depiction.

Kelvin chose the name Depiction because he wanted to emphasize how the work he creates is simply a pictorial representation of what already exists in the tangible world.

As an artist, Kelvin is continuously interested in how to expand on the ways he interacts with and shares his work with the public. One way in which he does this is by incorporating his work into calendars and on mugs among other things.

Kelvin hopes to expand Depiction, possibly start a gallery, and be in a position to create opportunities for fellow artists and inspire a younger generation of Belizeans.

Kelvin believes it’s important to actively work towards achieving one’s goals and become the person they want to be.

Kelvin takes these words to heart as he himself continuously strives to become the person and artist he wants to become.