Dr Fauci concerned that not all Americans want to get vaccinated, similar concern in other countries as well

By Aaron Humes: Belize Minister of Foreign Affairs, Senator Eamon Courtenay, opened this morning’s meeting of the Senate in Belmopan with a statement on the recent situation in Haiti, exacerbated by Tuesday night’s assassination of President Jovenel Moïse.

He confirmed that according to best information, the President and First Lady, Martine Moïse, were killed, the latter dying this morning, though some reports say her condition is less clear.

Courtenay said the Government extends its condolences to their families and to the French-speaking republic. He mentioned that depending on whom one believes, the attack was either state-sponsored, or ruthless and reckless.

The CARICOM Heads of Government meeting held virtually on Monday and Tuesday considered, as it regularly does, the issue of Haiti’s instability. President Moïse did not attend but assured fellow heads that he was in negotiation with opposition figures to settle the situation ahead of expected congressional and presidential elections in September and November.

An expert group report on advice and recommendations concerning the situation spoke of wanton killing and gangs taking charge, and generally “a complete breakdown of law and order.”

It continues to be the region and Belize’s hope that Haitians can learn to live peacefully and with each other in safe conditions, and so, Courtenay said, the President was being counselled prior to his death on a safe way out. The regional body and Belize call for transparency, impartiality and popular confidence in the forthcoming elections and to avoid a referendum on Constitutional changes proposed by the late President. 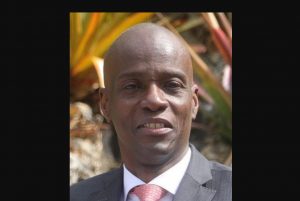 “I believe we all pray for Haiti and its people. The violence, the lack of law and order, has gone on for far too long. And that country, though by the metrics of the World Bank and the IMF, is poor, its people are rich. They deserve to have a peaceful life, they deserve the opportunity to work and pursue their business; and we stand ready, along with CARICOM, to do whatever is necessary to advance that process,” Courtenay concluded.

He said that he, on behalf of Prime Minister John Briceño who is attending to other business, will attend an emergency meeting with new CARICOM chairman Gaston Browne, Prime Minister of Antigua and Barbuda, at noon Belize time.

The Senate held a moment of silence in honour of President and First Lady Moïse thereafter.