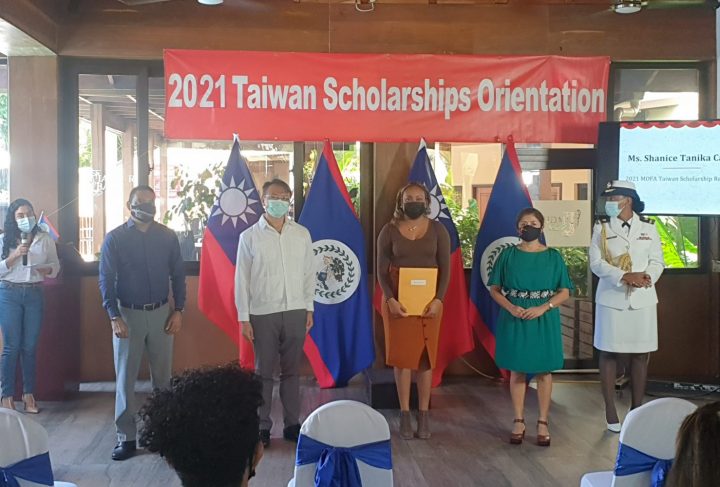 By Rubén Morales Iglesias: A record number of 51 Belizeans have received Taiwan Ministry of Foreign Affairs (MOFA) and International Cooperation and Development Fund (ICDF) scholarships to study in Taiwan for the next four years.

To better prepare the students before they travel to Taiwan at the end of September, the Taiwan Embassy and the Belize Taiwan Alumni Society on Saturday morning held an orientation at which only seven students were present due to the COVID-19 guidelines. The rest were able to follow the orientation virtually.

At the beginning of the orientation, Dr Fred Shyu, Senior Advise Oversees Community Affairs Council of the Republic of China (Taiwan) asked for God’s blessing for the 51 scholarship recipients. 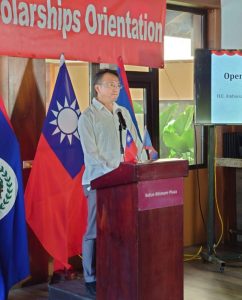 “It is a testament to the brilliance and competitiveness of Belizean students and another milestone for the 32 years of friendship and partnership between Taiwan and Belize,” said ambassador Kuang-Chou Chien.

The ambassador said that the 51 four-year scholarships is equivalent to a donation of BZE $4.6 million from the government of Taiwan to the people of Belize.

“As we say education is cornerstone to growth, it is remarkable that among the 37 Taiwan ICDF scholarship recipients, a historic high number of 13 will be studying in the medical or public health fields,” said the Taiwan Ambassador.

Taiwan has been offering scholarships to Belizean students since 2002 said the Taiwan Embassy.

The Embassy also said the majority of MOFA Taiwan Scholarship recipients will study Mandarin Chinese in a language Center before they start their degree programs.

Keynote speaker Governor General Froyla Tzalam congratulated the students and said that she was once such a student. 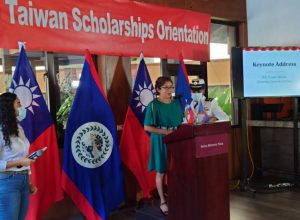 Salam said that the binary placement of formal and informal education is not serving us well as it pits the educated and the un-educated against each other and the un-educated always losing out on opportunities to contribute meaningfully to the development of Belize and to themselves. She said this directly affects our young male population and our people generally.

“I pose to you, that with the knowledge that you will gain, that you use it to examine why our society is the way it is now and how we’re going to make it better,” the Governor General challenged the scholarship recipients.

“Higher education in developing countries has been criticized for being too distant from community concerns and has resulted in the production of graduates who tend to be ignorant to the development challenges of their local communities and countries.”

The Governor General said Belize is blessed in having diverse cultures which we need to capitalize on. She said she was glad when she saw that the chosen disciplines appear to be on good track towards Belize development.

She also had a word for those who applied for scholarships but were not successful, telling them not to give up. 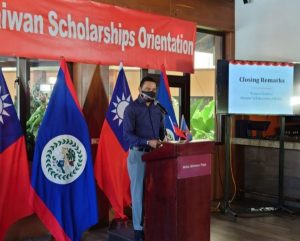 “Open your hearts and open your minds to this exciting educational journey,” said Education Minister Francis Fonseca who thanked the Taiwanese government for awarding scholarships to hundreds of Belizeans over the years.

He encouraged the students to take advantage of a once-in-a-lifetime opportunity to study in a foreign country where they will meet a new culture, make new friends, learn mandarin. It’s an opportunity that will change their lives, he said.

He reminded them that they will all be our student ambassadors, that they will be representing our country and our people, and to treat everyone with respect and courtesy.

In addressing the scholarship recipients, Alobi Young, president of the Belize Taiwan Alumni Society (BTAS) said that they would not only gain an education but studying in Taiwan will also afford them the greatest cultural experiences, learning mandarin, gastronomic delights, and Chinese culture. He said the BTAS hopes they return and give back to Belize.

Young added that the BTAS will establish a network to assist in re-transition to Belize so that when they can come back successfully to vibrant job opportunities.

The scholarship recipients also saw a video sent by the Belize Taiwan Association, the association of Belizean students in Taiwan. The video showed the types of experiences the new students will be exposed to during their four-year scholarship.

Student Ayleen Perez gave the vote of thanks in representation of the 51 scholarship recipients.