Friday, 04 September 2015. Victor Castillo Reporting: Twenty-fiver-year-old Leslie Stains, from a Belize City address; Dubian Montero, 32-years-old from Bullet Tree in the Cayo District, and 19-year-old Raylie Usher from Hattieville, all coast guards, were jointly charged for the crime of extortion in the Corozal District. 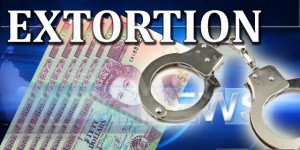 The resident claims that the three officers demanded money from them to avoid being detained and having his goods confiscated.

The trio were escorted to the Corozal Magistrate Court, where in the presence of a Justice of the Peace, they were charged for the offense and offered bail of $1,000 each.

Up to the publication of this article, the trio have not met bail and remain in police custody.

An ID parade will be conducted on Monday by Ricardo Rivero who is the complainant. He may also face charges for the un-costumed goods.