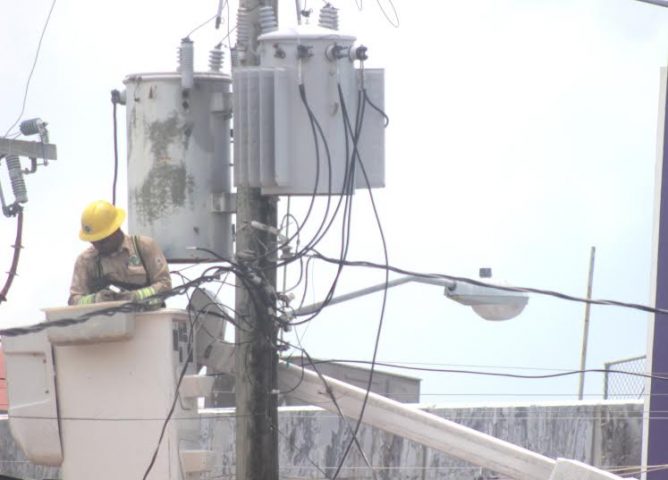 By Aaron Humes: A transformer belonging to Belize Electricity Limited (BEL) caught fire this morning at around 9:30, causing the Belize City Magistrate’s Courts to shut down their offices for the rest of the day.

The misfiring transformer, located at the corner of Bishop and Regent Streets next to James Brodie and Company Limited’s appliance division store, knocked out the Belize City Magistrate’s Courts’ computer system and caused great difficulties for the court to operate properly and serve the public in a most efficient manner.

The courts rely heavily on their computer system to process bail, the payment of bills, the printing of court records and basically almost every task that now uses a computer.

When the transformer ignited, a number of loyal patrons were buying food at the Coca Cola booth which is situated right below.

A police officer who was buying food at the Coca Cola booth recalled that he heard a frying sound and when he looked up above his head in the direction where the sound was coming from, he only saw fire and fearing for his life, ran out from where he stood holding his head.

Others quickly drifted away from the area but in less than 20 seconds, the fire that had quickly ignited had just as quickly cooled down.

BEL authorities were called in immediately and by about noon had restored power to the area. The courts closed shop at 11:30 and resume normal working hours on Wednesday.