David Flores is Fisher of the Year 2018 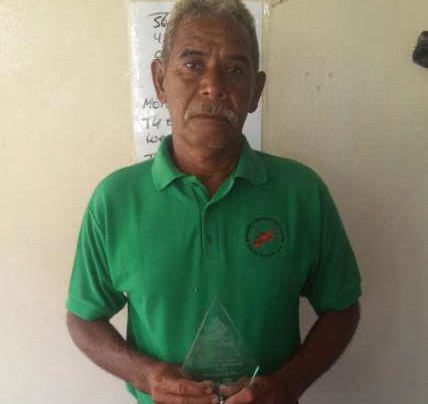 By BBN Staff: Despite getting a 93 percent score on the Belize National Selection Examination (BNSE) over three and a half decades ago, Copperbank Village native David Flores knew, from a teenager, that he wanted to be a fisher.

Flores faced several obstacles along the path, including the death of an older brother; a category 4 storm while at sea with his teenage son; and having to put on hold, for almost five months, going out to sea due to the destruction of his fishing vessel.

But “Tar”, as he is affectionately known by his friends and fellow villagers, never gave up. These experiences only solidified his desire to continue as a responsible fisher.

“Growing up in Copperbank Village, Corozal in the 60’s was hard,” Flores explained.

“The roads were unpaved, and it took a very long time for travel to [the economic capital] Belize City and back”.

Not only was David’s dad – father of 5 girls and 7 boys – a farmer who planted papaya, plantains, and cocoa for sale; he was also a tradesman, who bought and sold other vegetables, which he took, along with his own produce, to sell in Belize City.

They would travel by boat, which his father owned. “I used to accompany my dad after school when he took produce to sell. So I have been coming to Belize City from a child,” David bragged.

Later on, David’s two older brothers, Arturo and Haber, had convinced their father to give them a boat so they could also fish.

During the summer, David, who was only 14-years-old, would accompany his brothers. One September, when it was time to return to school, David did not go home from fishing during the summer.

“I never came back for school in September. Instead, I came back in December,

even though I had passed the Primary School Examination with a score of 93”.

Despite pleas from his father to go to high school, David admitted that he refused because it would have been difficult traveling back and forth since the roads were bad and there was no running water in Copperbank Village.

“There was no one in Corozal Town (where he would have stayed while going to high school) that I knew so it would have meant being away from home for the entire week and returning on weekends. I did not want to do that,” David announced.

He preferred living on a boat in Belize City with his brother while the other brother would return home, monthly, to take money home to their family.

Even now, almost 4 decades later, David’s eyes would light up whenever he speaks about fishing. “What I like most is the freedom one has when he is out there, unlike when you are on land. The fresh sea breeze is welcoming and comfortable. There is no one or no noise to disturb your peace,” David exclaimed.

But sometimes sea life can be dangerous, especially if there is a storm which threatens while one is at sea.

“That is the thing that really gets me scared. I am not afraid of sharks, but the weather is unpredictable. You could be sleeping at night and a storm comes and your life could be gone in an instant,” he said.

David recalls one time when several boats were caught in Hurricane Chantal while at sea in 2013.

“It was October. We heard the storm coming; it was coming from Honduras as a Tropical Storm”.

But the strength of Tropical Storm Chantal increased rapidly as evening approached, they were too far away from Belize City, at Half Moon Caye, to make it back in time and escape its wrath.

The category 3 storm would increase to category 4 within an hour.

“I was scared because I had my 16-year-old son as well as one of my brothers with me,” David recalled.

There were about 37 – 40 boats which the fishers decided to anchor and tie together. David says that was the only way they would make it through the storm. It lasted for about two hours, and sunrise would confirm that several vessels were destroyed.

Luckily, no one was hurt. However, David remembers “you could see the destruction of the storm to the entire Caye”. It took him close to five months to repair his boat, before he could return to the life of a fisher.

Similarly, getting ready for the opening of the lobster season, in many instances, takes a few months.

After repairing and/or painting their boats during the closed season, final preparations for going out to sea are then made about two days before the June 15-opening of the lobster season. “You have to have a plan and ensure that you have … provision, water and ice,” he said. David and his brothers, initially, would spend between 12 -15 days at sea so we could keep watch that pirates don’t steal our traps. We would start fishing early in the morning around 6:30 or 7 o’clock. After the lobster season opens, the days at sea would decrease to about 6 or 7. “Nowadays, I dive and use traps and shade [which is used to lure the lobsters].” Quite different from many years ago when most fishers would use lines to fish.

David says the traps work better when there is a north wind blowing around November-December; while the shades would work during the summer months when the weather is warmer.

But, there was a time in his fishing career when David felt like giving up.

It happened when one of his sons had fallen ill. David said he was not making enough money to seek medical treatment for his 12-year-old son, who developed a health issue for which he needed to conduct further tests to find out the cause. “I had to bring my son to Belize for a CT Scan to try and figure out what was wrong. We didn’t have enough money,” he added. David expressed that he started to farm when he began losing money as a fisher because he was unable to receive good prices for fish and other seafood.

It was then that David reached out to National Fishermen Producers Cooperative Society Limited for financial assistance, with the promise that he would return to fishing.

“With the help of Ms. Barbara Bradley, of National Fishermen Cooperative Society Limited, David received financial assistance to pay for his son’s medical care. David encourages other fishers to join some kind of union or cooperative. He explains that there are several advantages such as Christmas bonuses (for qualified members); scholarships; and death benefits for family members of deceased fishers.

Additionally, David says there are small loans available for members of the cooperative. “There are certain rules and regulations which govern the distribution of loans, the main one being a responsible fisher,” he states.

Although the support of outsiders is important to him, Tar says it is his family who are his biggest supporters. His wife of almost forty years, along with their 4 grown girls and 2 grown boys, are proud of David being selected as the 2018 Fisher of the Year. His son Govany, in nominating his father, wrote that his father “…Abides by the rules of fishing and does his best to help the villagers of Copperbank. He is a great father”.

that landed him the nickname Tar. “They call me Tar because I am a friend to everyone. Once they get to know me, they end up sticking to me like tar,” he laughed.

David encourages fishers to join a union or cooperative in order to take advantage of several benefits they offer, including small loans, Christmas bonuses and burial aid for their loved ones. He also reminds fellow fishers that in order for them to have the resources available for a long time, they need to be responsible for those resources.

He emphasizes that it is the only way they will be able to provide fish, conch, and lobster for their family and the Belizean people. “We need to do the right thing, we need to fish in the right way in order to continue doing this. If we don’t fish right, then we will end up losing what we like to do in life.”