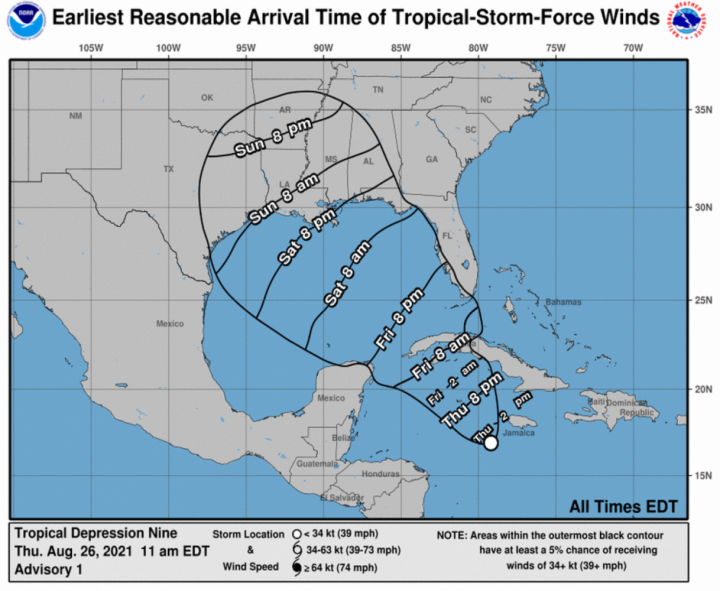 By Rubén Morales Iglesias: The tropical wave in the Caribbean has now been upgraded to Tropical Depression Nine according to the United States National Hurricane Center (NHC) which is monitoring two other systems in the Atlantic Ocean as well.

The NHC said the environmental conditions are conducive for Tropical Depression Nine to become a tropical storm “later today or tonight while the system moves northwestward over the northwestern Caribbean Sea, reaching the Cayman Islands tonight and western Cuba and the Yucatan Channel Friday and Friday night”.

At 6 am on Thursday, Nine was located in the west-central Caribbean Sea at 16.9 North and 79.2W and about 150 miles south-southwest of Jamaica. Nine had maximum sustained winds of 35 miles per hour and was moving northwest at 13 miles per hour.

Tropical Storm Warnings for the Cayman Islands and western Cuba may be issued later this morning.

“Heavy rainfall and flooding are possible over portions of Jamaica and the Cayman Islands today and tonight, and will likely spread across Cuba and the Yucatan Peninsula on Friday,” said the NHC.

Tropical Depression Nine is expected to enter the Gulf of Mexico by Friday night.

The NHC said Nine is expected to continue its northwestward movement “potentially bringing dangerous impacts from storm surge, wind, and heavy rainfall to portions of the coasts of Texas, Louisiana, Mississippi, Alabama, and the Florida Panhandle by Sunday and Monday”.

The NHC said that people in this area should closely monitor the progress of this system particularly since it’s still forming and there is uncertainty regarding its track.

The NHC said a second system over the central Atlantic approximately 600 miles to the east of Bermuda, which has disorganized showers and thunderstorms, is expected to become a tropical depression later this week.

The third system is a tropical wave that is located over the central tropical Atlantic about 1000 miles west-southwest of the Cabo Verde Islands and could become a tropical depression by the weekend.