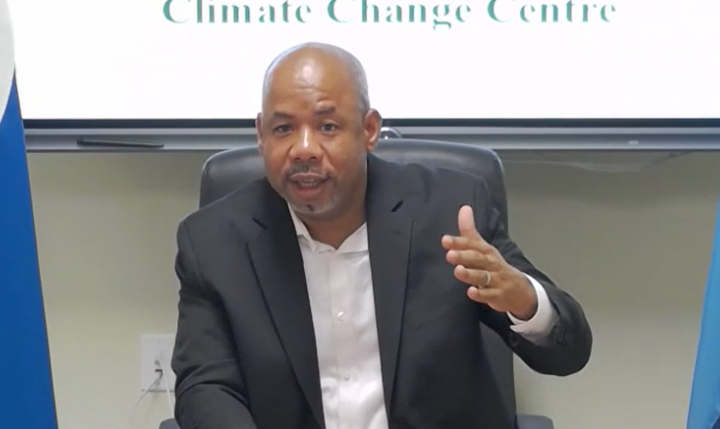 By Rubén Morales Iglesias: The Caribbean is more vulnerable to climate change than other countries because of its geography said Dr Colin Young, Executive Director of the Caribbean Community Climate Change Centre (The 5Cs) located in Belmopan.

Dr. Young was speaking on Monday at a 5Cs virtual press conference attended by journalists from the entire Caribbean region. He said over the last five years climate change has caused US$1.27 billion in damages to the region.

Dr. Young said that climate change has affected more than 24 million in the Caribbean and every year it affects more people.

Since 2005, the 5Cs instituted by the Caricom Heads of Government, has invested US$260 million for climate change interventions throughout the region.

“The 5Cs, long before 2015 adopted the 105 to stay alive campaign,” said Dr. Young in reference to the objective of avoiding the world reaching 105 degrees Fahrenheit.

He said that the developed countries have not delivered the contribution they promised in 2015 at the Paris Agreement.

“Global greenhouse gas emissions are increasing rather than decreasing, and obviously temperatures are increasing. Five years later the nationally determined contributions, those pledges and targets set by nations globally to reduce emissions, to keep temperatures goals within reach have the world on a trajectory to reach three degrees by 2100 and as we just read in the IPCC Sixth Assessment Report to reach 1.5 degrees within 20 years, even under the lowest emission scenario.”

“Five years later, developed countries have not delivered the US$100 billion per year they promised in Paris. Rather, accessing finance has become more challenging and the bureaucracy to access has become even more difficult to navigate, slowing even more the trickle of climate finance, and thus our ability to adapt to climate change.”

“Since 1950, over 324 natural disasters have struck the Caribbean killing over 250,000 people and affecting more than 24 million.

“Between 1970 and 2020, 91.5% of Caribbean disasters are climate change-related; hurricanes, floods, droughts, for example. The combined losses and damage from hurricanes of over US$137 billion.

“Between 2010 and 2020, the region has been impacted by over 150 disasters that directly impacted over $22 million people.

“Today the Caribbean, on average, experiences four significant events, these are events that cause losses of 20% of GDP or more per year. Annually the region suffered losses equivalent to 2 to 3% of its entire GDP.”

Dr. Young said every year the Caribbean experiences climate change events which cause losses that exceed the Gross Domestic Product growth of our countries.

Hurricanes cause annual damages of US$350 to US$550 million per year in the Caribbean said Dr. Young. Agricultural losses amount up to 50% of GDP

Dr. Young said that for us in the Caribbean Climate Change is an existential crisis.

The oceans are getting very warm. This affects fishing and tourism, the coral reefs, the salt water, and hurricanes which are getting stronger every year.

He said the time for action is now. There’s no time for delay.

We need to keep the world’s temperature Under 105 to keep alive.

He said the goal is to lower the carbon emissions by 2050 but in reality, the way we’re going we might surpass 105 degrees Fahrenheit by 2030.

Young added that climate change impacts affect the Caribbean more than other regions because most of the countries are surrounded by water and at the rate we’re going the Caribbean will experience multiple disasters happening at the same time.

He said that with so much carbon dioxide in the air, because of the carbon emissions, the oceans are getting acidified which in turn bleaches the coral reefs. When that happens, it affects sea life and tourism, and our livelihoods.

“Year after year we see the number and severity of climate hazards increasing,” said Dr Young.

He said year after year, we see and experience more frequent and severe droughts, more frequent and intense downpours, increasing coastal erosions and the losses of our beaches, hotter days and nights, debilitating heatwaves, and hurricane seasons that are above average packed with category four and five hurricanes.

Dr. Young said that while developed countries have not done all they should have done according to the Paris Agreement, now that their countries are being affected, the hope of the Caribbean countries is that those developed countries will finally do something to lower the carbon emissions to put a hold on climate change.

He made reference to the floods in Germany, the wildfires and heatwaves in the United States and other countries, and the sea level rising and affecting developed countries, as examples of climate change now hitting the developed world.

Dr. Young said the situation is dire and we need to act now.